“LOST” and the Law

SPOILER ALERT: “LOST” turned up in downtown Honolulu today, returning to the old Honolulu Police Station, the historic Walter Murray Gibson building at the corner of Nuuanu and Merchant streets. This location previously played the lockup where Sarah bailed Jack out in the Season 3 premiere, “A Tale of Two Cities.” And it looks like the building continues to be typecast.

Most of the filming was done inside, though some street shots required the strategic placement of Los Angeles Police Department cruisers. Like yesterday’s shoot in Waikiki, Josh Holloway (Sawyer) was the main castmember on the set. This time, though, he was joined by Ken Leung (Miles), and a third actor or character referred to as “Liam.” There was no word on how the scenes were unfolding, but crew chatter suggested two apparent settings: the police station, and a locker room.

Across the street, the staff at Murphy’s Bar & Grill (another “LOST” location) posted to Twitter: “Ooh Josh Holloway is super handsome.” Murphy’s ended lunch service early in order to feed much of the crew.

Thanks to local geek Michael (who took a quick video as he walked past the set) and visiting fan Damian for the reports!

View from a vaccination trial

Socially distance sales at the Ala Moana Apple Store 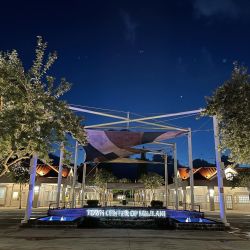